I have been feeling a bit down in the dumps this week and realized it is probably because our latest Quilt for Change exhibit, Water is Life, is opening in Geneva at the United Nations European headquarters and I am not there. So much work goes into these exhibits that it almost feels like birthing a child. Coordinating a group exhibit is challenging in many ways, especially when the parties involved are spread not only across the continent, but on opposite sides of the Atlantic as well. A lot of the work for this exhibit needed to be done from Thanksgiving to Christmas (yes, we learned not to have that kind of timing again) and so I felt like I was sacrificing family time and Martha Stewart-like preparations (so not me!). We were privileged to have the largest number yet of entries, which was gratifying but which also made the selection process very difficult. Over the years we have formed a philosophy about Quilt for Change: we want to encompass the widest number of artists possible and unlike some other art exhibits, the quality and power of the message is as important as the level of art. We are trying to tell a story with each Quilt for Change exhibit, one that encompasses as many regions of the world as possible and is sensitive to the many cultural, ethnic and historical aspects of each topic. The jurying deliberations were therefore quite intense and I hope that everyone that entered realizes that we gave a great deal of value and thought to each piece we considered.

Then came a several month period where we let everyone know who had been accepted, dealt with shipping and photographing of quilts, compiled and edited artist statements, created posters and invitations and organized the many other minutiae involved in creating a world class exhibit. Fortunately, between Rome, Geneva and Rhode Island there were many hands at work and the opening in Geneva went off beautifully. The exhibit will be at the United Nations for two weeks, then will move to Rome for an exhibit there in October.  Next spring Water is Life will debut in the U.S. at the New England Quilt Museum and will then move on to travel with Mancuso Quilt Festivals. I will be at the opening of the exhibit in Lowell, and hope many others will join us there as well. 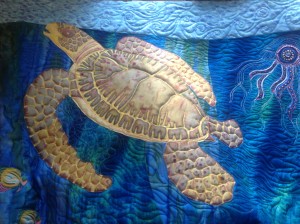 As I said at the beginning of this post, I was not able to be in Geneva this week for the opening of Water is Life, but my quilt was –  so I have decided to tell you a bit about how Bounty of the Seas came into being. For the first time I am working in a series. I will continue to work on water quilts as there are two other exhibits I will be entering this year centered on watery themes. The quilt started with the turtle. Dick was posted as the Public Affairs Officer at the U.S. Embassy in Muscat, Oman.  Among other wonderful things, Oman boasts one of the largest sea turtle nesting sites in the world. During our three-year tour in Oman, we went camping regularly and watched the turtles come up on the beach at night to lay their eggs – huge green sea turtles the size of sandboxes. We also loved to visit a small beach in Muscat where there were two turtles that would let us come quite close when snorkeling. Dick worked with local naturalists and scientists to preserve the nesting areas and track the turtles. As are many people, we have been drawn to sea turtles ever since, perhaps it is because their expressive eyes give the sense that they are ancient and wise. I painted my first turtle from my own drawing in a class at Houston with Hollis Chatelain. I loved the way he came out when wet, but as he dried he lost his vibrancy. I went on to paint other turtles using Tsukineko inks and they came out more intensely colored, but I still loved my first turtle. I decided to go back over him with fabric markers to sharpen and darken the image and was very please with the result. 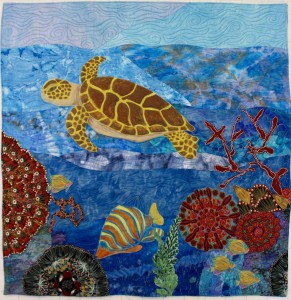 Next I began with a small study. To form the watery background I made curved horizontal cuts to create a feeling of currents of water moving horizontally. I built up the sides with vertical angles to add some coral reef flora and fauna to frame the green turtle. For years I have been collecting Australian fabrics based on aboriginal designs because they reminded me of coral reef creatures – sea anemones, brain corals, coral fans, even sea cucumbers! I fussy- cut shapes and applied them using using misty fuse. The addition of a brightly colored fish added interest and balance. I then trapuntoed the large shapes to make them more three dimensional. Finally, I added more detail with fussy-cut fish and with machine quilting, forming swirling water lines and bubbles. 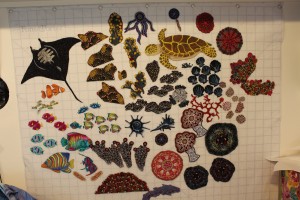 Now that my study was complete, it was time to work on the larger piece and give my big turtle a home. This time I pieced the water vertically: I can’t say why, but it felt better to have the water rising from the bottom up. The US Mission in Geneva (sponsors of the Water is Life exhibit)  had expressed an interest in larger quilts and so we extended the exhibit entry size up to 78 inches on each side. I decided to go big and the piece ended up 72 inches wide and 43 inches high. That was a lot of space to fill! I got creative in my sea creatures, fussy-cut schools of fish from commercially printed fabric and added a sting ray and jelly fish (quilted with metallic silver thread). It was so much fun!! If you want to read my artist statement about the quilt, visit the blog on the Quilt for Change website. 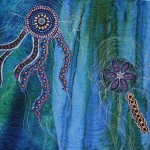 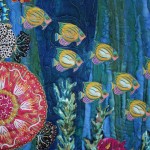 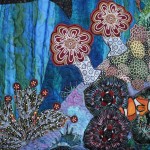